Please download the English version press kit from here.
Please enter your e-mail address and download it from the URL of the e-mail you received.

We are delighted to announce that the work of TANSAN DESIGN STUDIO, which was created in collaboration with Japanese traditional Kinran metal yarn textile artisans Nishijin, and titled “Energy from Mountain”, was selected to be shown at an exhibition, “Japon-Japonismes. Objets inspirés, 1867 -2018”. This exhibition is held in Paris, France from 15th November 2018 to 3rd March 2019 at Musée des Arts Décoratifs, at 107 rue de Rivoli.
“Energy from Mountain” was selected out of numerous crafts and designs from the period of 150 years of Japanese history. It is a Japanese traditional silk textile from Kyoto telling a 1200 year-old chronicled story about Kannon, (Deity of Mercy), of Tachiki, portrayed by Wakana Ino of TANSAN DESIGN STUDIO.
In collaboration with the expert artisans, Nishijin, who has a history of 1200 years creating the Kinran golden silk woven textiles for Buddhist temples. The vibrant textile “Energy from Mountain” is woven so gracefully and inventively, like a Mandala, that it perfectly illuminates the conceptual work created by TANSAN DESIGN STUDIO. This is the first Japanese traditional Tanmono textile introduced by the studio. The textile is created using vividly dyed silk and metal yarn woven into patterns that arrange so intricately that the images that are seen on the textile shift depending on the angle it is viewed from. The finesse of the silk and shimmering gold cultivate the mind and provide spiritual enrichment.

The Story of Tachikisan
In 815 A.D., (the 6th year of Konin Period), a Buddhist monk named Kobo Daishi noticed a glowing of a spiritual tree on the banks of the Seta River while he was traveling on an ascetic training. As he wandered, a white stag appeared in front of him and took him on its back. It jumped the river Seta to guide him in front of the tree and transformed into Kanzeon goddess. Since Kobo Daishi was 42 years old and at what is considered the age of calamity, he decided to carve Kanzeon goddessonto the live standing spiritual trees in desire to not only to save himself form misfortune but in order to save others for all eternity. After this, the temple has been called Tachiki Kannon or Tachikisan.

The Origin of Energy from Mountain
The textile designer Wakana Ino was inspired by the flow of the Seta River that has remained constant for more than 1200 years and also by “Tachiki Kannon” that was protected in the mountains by generations of people for an age. One of the designers of TANSAN DESIGN STUDIO, Wakana,is the firstborn child of a present resident priest.  She realized that Tachikisan and the surrounding environment are the origin of her creativity and she applies her joyful emotions to draw and express to her work.  Moreover, by projecting the glowing spiritual tree of Tachikisan and its story on the beautiful Nishijin golden brocade of 1200 years, arises the special textile of “Energy from Mountain ”.

* Kobo Daishi: Kukai (744-835) A very famous Japanese monk who established a hidden sacred place in Koyasan
* Age of Calamity: A belief that there are certain ages where disasters often rise in one’s life 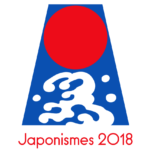 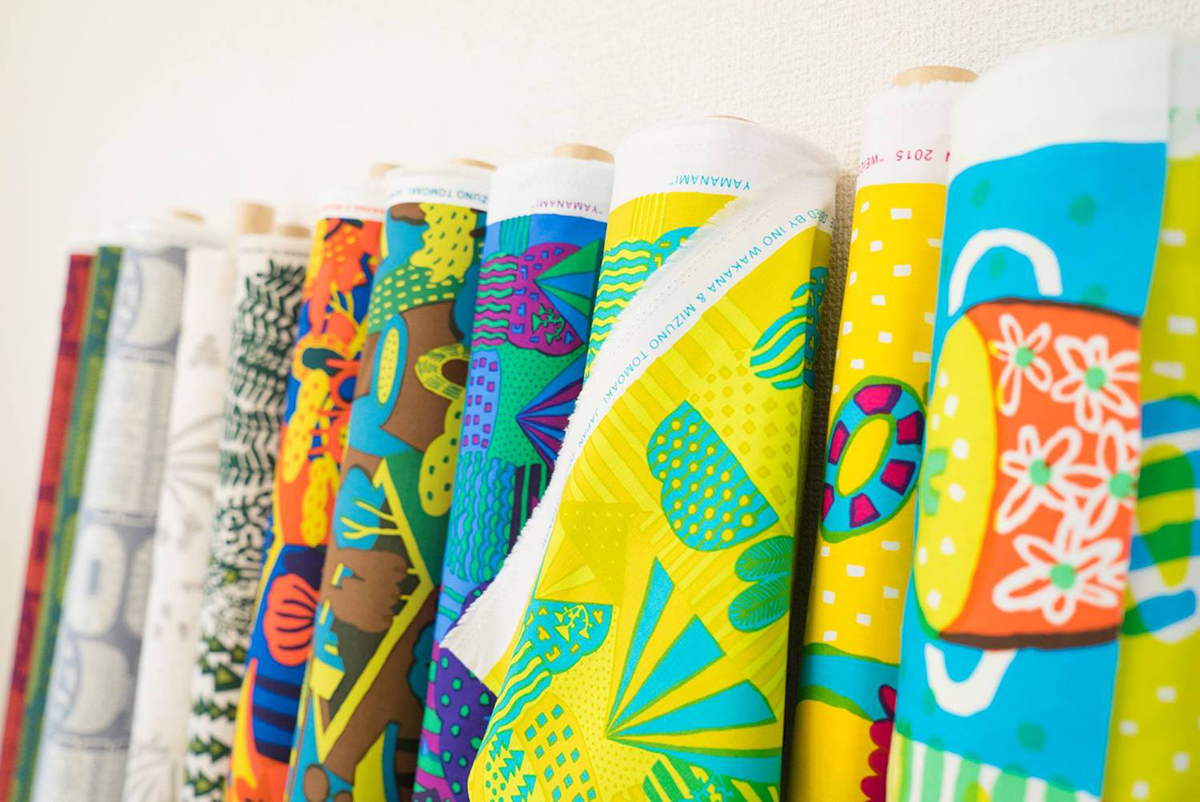 Title:  TANSAN TEXTILE
Product:  Textile
Method:Silk screen hand printing
TANSAN TEXTILE is a unique textile brand formed
by TANSAN Design Studio.  They create using the
inspirations from the sceneries and images found
in their everyday lives and expressing them vividly
and uniquely into the textile. 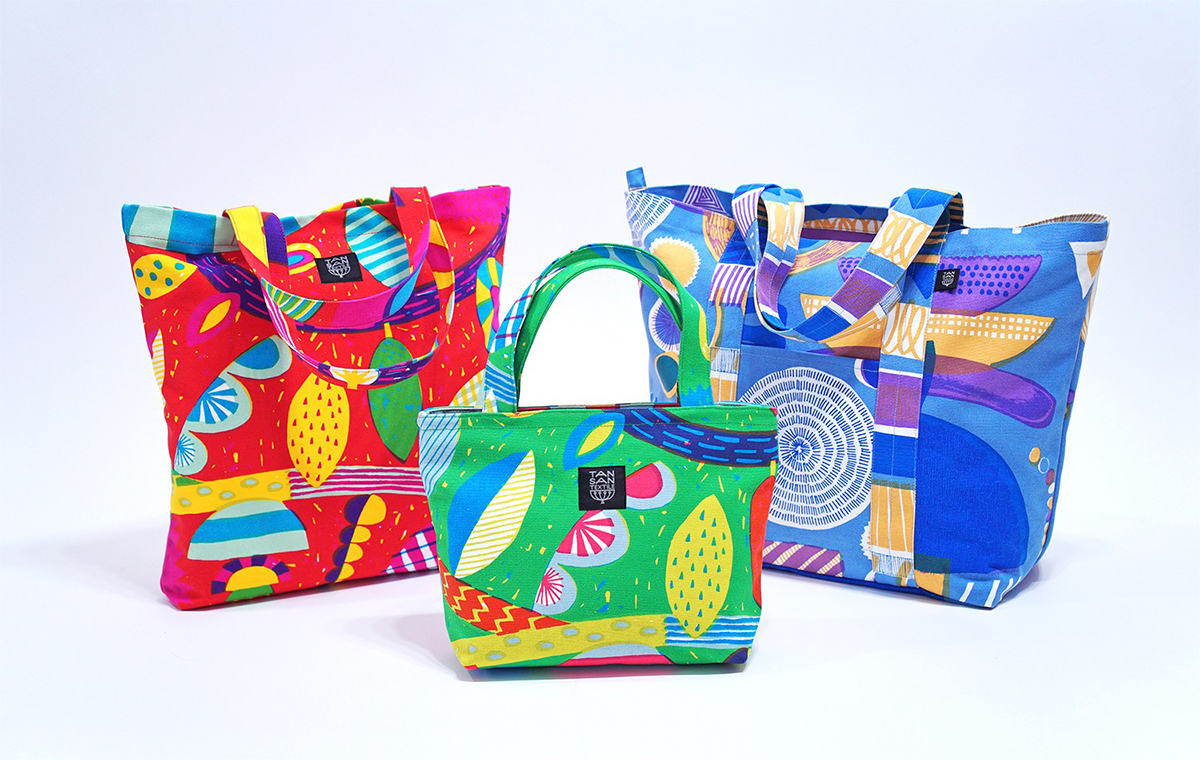 Title:  TANSAN TEXTILE BAGS
Product:  Bags
Material:  Cotton canvas of Hanpu #8
Size:  Large and Small
A bag using TANSAN textiles makes you feel happy wherever
you are on the go with it.  Using a durable thick canvas of
cotton called Hanpu #8 which was originally used on sail, the
bag is tough and hard at first but it generally gets softened
and becomes a part of you. 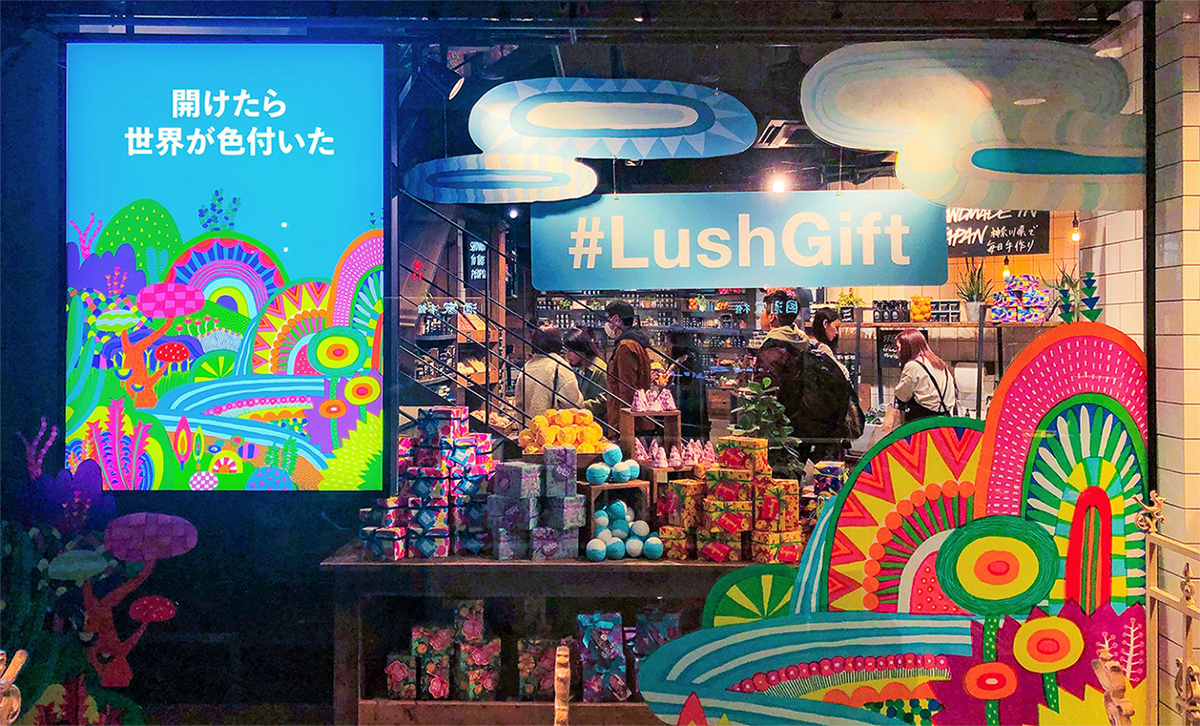 Title:  SANSUI
Product:  Package&Poster&Store display design
A collaboration with Lush Fresh Handmade Cosmetics UK where TANSAN
Design Studio provided designs for gift packages and posters used in
stores throughout Japan.  In stores in Shibuya and Harajuku, the same motif
was used to wrap up the store facade display windows and outshined the
whole store with the popping vitamin colors of TANSAN. 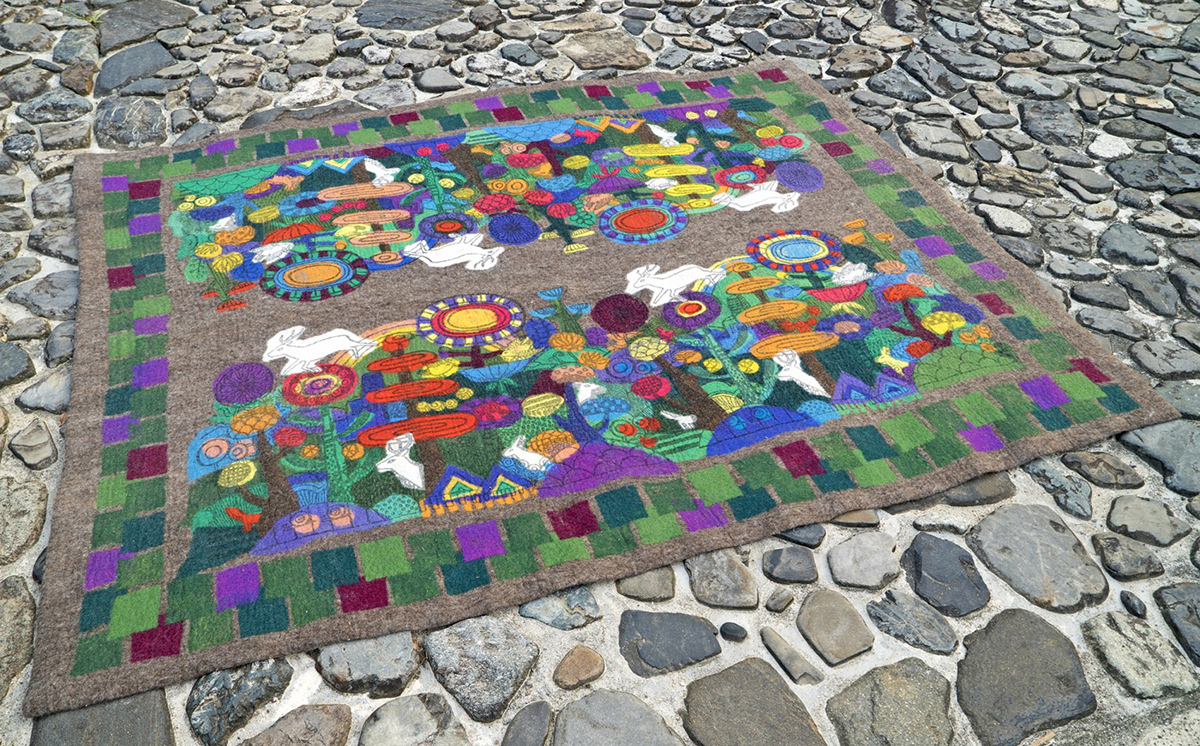 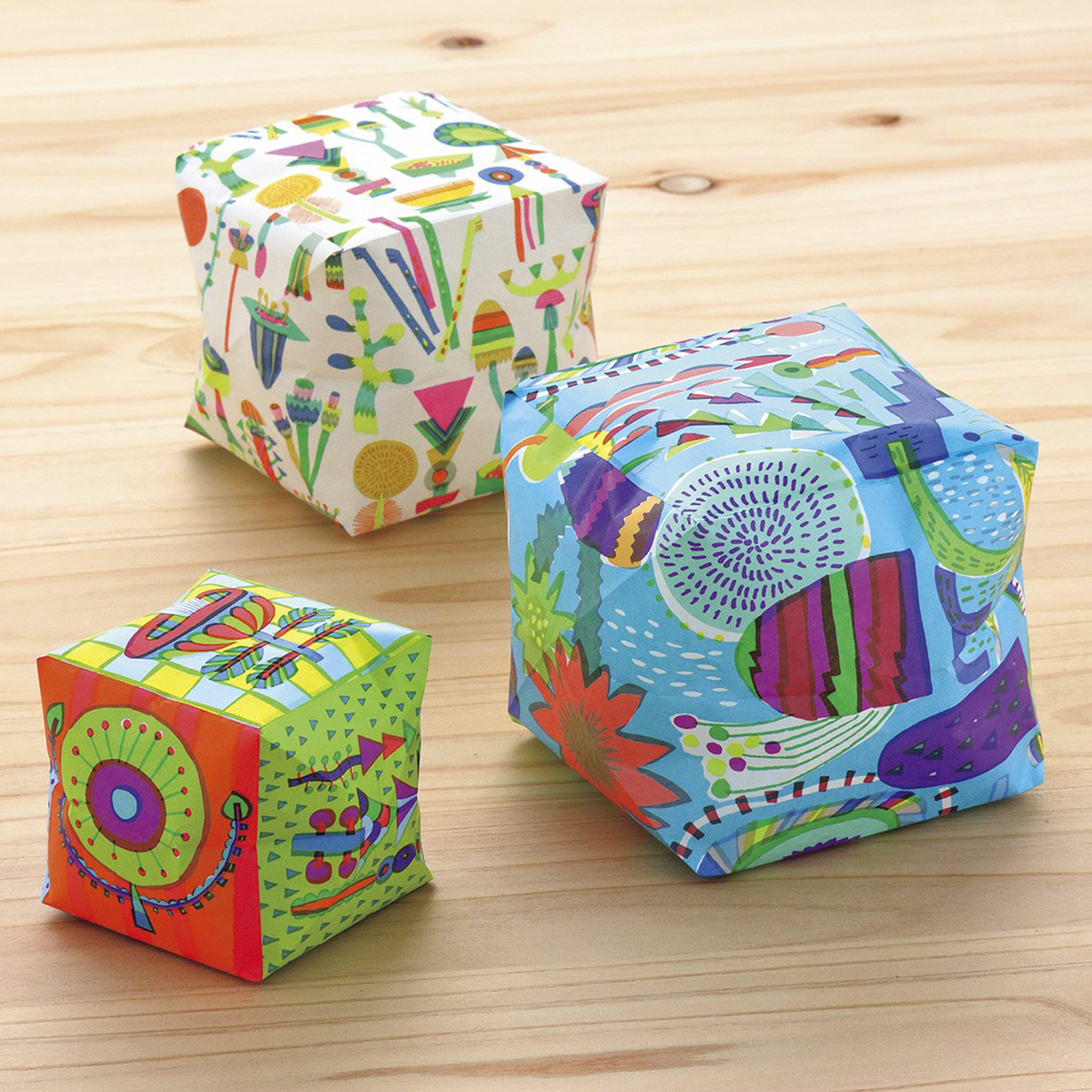 Title:  TANSAN HIKING
Product:  Paper Balloon
Material:  Handcrafted Paper Work
Size:  Small, Medium and Large
In collaboration with a brand called “cusuri” which is produced by a
printing company Toyama Sugaki Co., Ltd., paper balloons were created
that were originally a complimentary gift given by the traditional household
deliverymen of medicine in Toyama.  This is a project where the old-school
paper balloons that are hand crafted by elderly ladies in Toyama fused with
the modern illustrative design of TANSAN Design Studio. 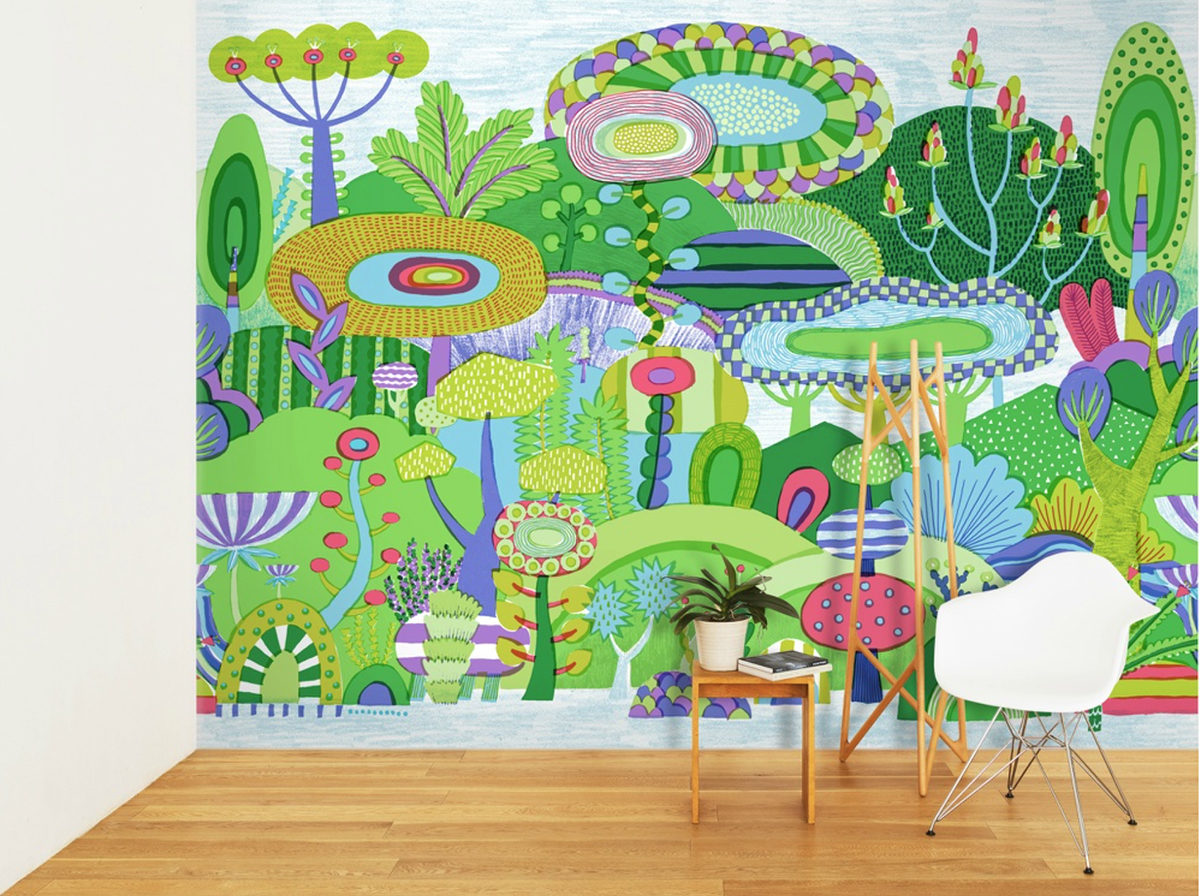 Collaborated with Who wallpaper and designed
a wallpaper called “Mori no Utage” that means
“Party in the Forest”.  Among the designs
launched, a huge piece of wallpaper with a
width of 3.6m by height of 2.7m turns a room
into a bright forest. 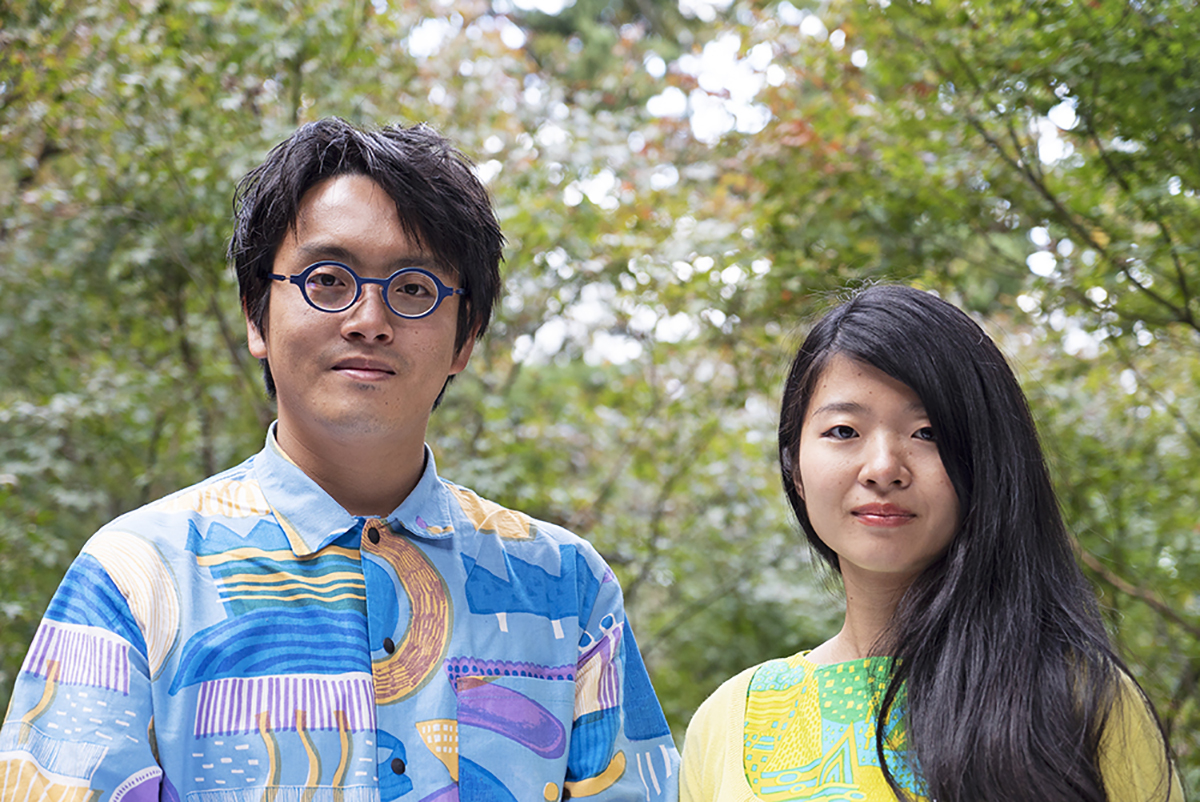 Estabilshed by textile designers Tomoaki Mizuno and Wakana Ino in 2014, TANSAN DESIGN STUDIO is located in the area full of plants and nature. They find inspirations in their everyday lives and turn them into textiles with vivid mementoes. From rice fields to country houses and wild flowers on the sidewalk to the sound of babbling streams, everything around the atelier are dazzling under the light of sun and moon.  Culture exposure and special experiences from traveling add extra essence to their design as well. Their lifestyle itself is considered as the concept of their creations and their joyful memories exceed the boundaries of art and design, to introduce new products and art pieces that make ordinary atmosphere more and more delightful. The studio has its original textile brand TANSAN TEXTILE, and in addition, they create collaborative products with other business enterprises and provide designs to manufacturers.
Delivering a bit of fizz to the lives of others.

Delivering a bit of shine to the lives of others, Japanese traditional weaver Nishijin Okamoto consists of a group of highly skilled specialist craftspeople. These craftspeople have perfected a hand weaving technique with a rich history of over 1200 years of tradition for silk brocade, which is considered as a treasure and called “Kinran” in Kyoto.  Their hope is to invent and introduce a new textile into the world while preserving the unique features of their mesmerizing silk brocade.“Energy from Mountain” was conceived when a Nishijin Fabric Designer Ema Okamoto encountered TANSAN Design Studio.